Beware of on-line auction listings of fake or misrepresented swords and knives!

Click and see what you should and must avold!

ACRYLIC SWORD & SCABBARD STAND: This pair of acrylic sword & scabbard stands was designed to hold one sword and its scabbard. Each is 5 inches tall and designed with square edge groves to prevent the sword or scabbard from flipping over as often happens with similar stands with a rounded cut. They will accommodate swords of all sized from small bowie knives to cavalry sabers.  This design presents a very clean and crisp display that is attractive. $27.00

This is a Model 1852 Naval Officer’ssword identified to Boatswain John Adams Floyd. The sword is marked A. W. Pallard Boston, MA, and is high-quality! The hilt is tight and retains a good amount of the original gold wash; has a unique mesh grip; and has John A. Floyd engraved on the front edge of the guard. His name is also on the top scabbard mount. The blade is frosty with a large U.S.N. in the center panel and a large American Eagle and anchor on the opposite side. It is unsharpened and has a crisp point. The scabbard retains the top 2 mounts, but is missing the drag and the back is open. Identified swords are rare, but identified Naval swords are scarcer. Included with the sword is a 199-page binder with historical information to include the entire pension file for the officer. Please look at the photos and click on the bottom icon to read the historical file. $2600.00 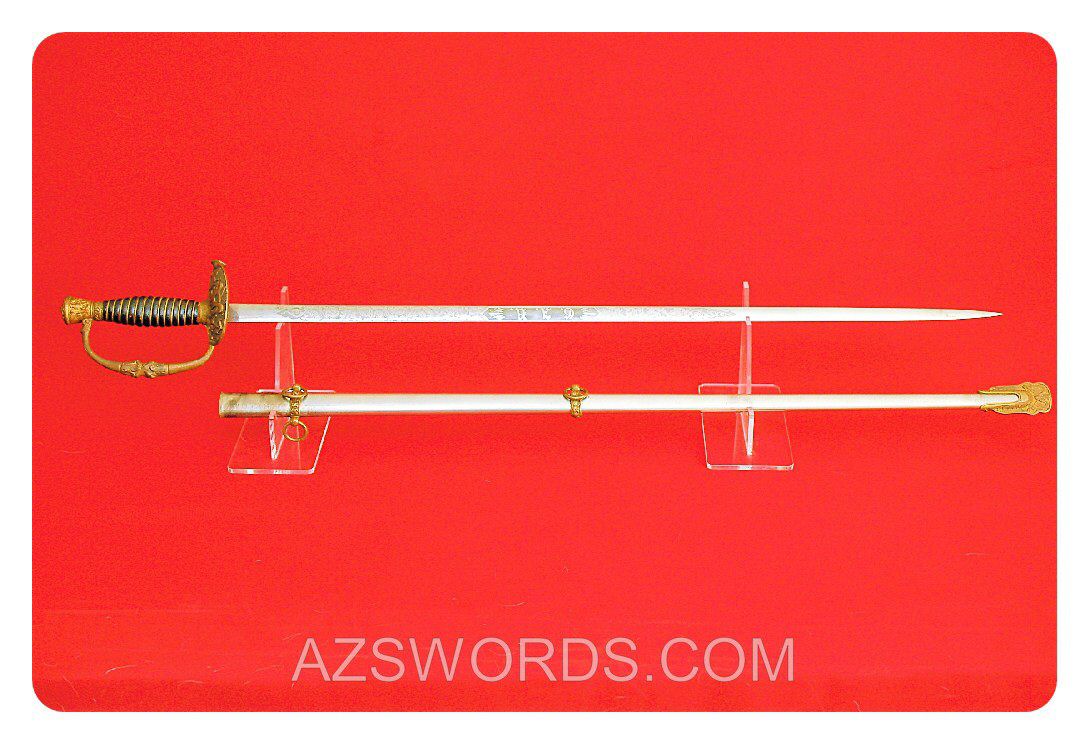 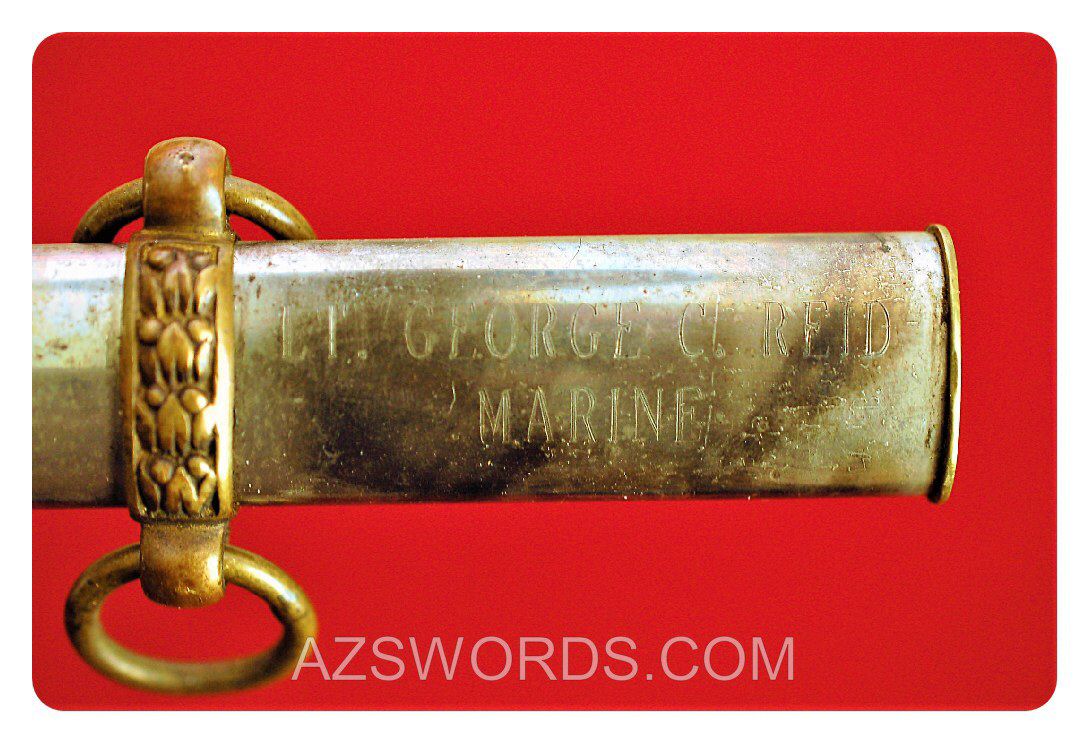 U927. G.A.R. SWORD – CIVIL WAR MARINE CORPS OFFICER:  A Grand Army of the Republic (G.A.R.) sword is very common; however, an identified example is rare and even more scarce is one identified to a Civil War Marine Office. This sword belonged to Lieutenant George C. Reid. George Croghan Reid was commissioned a Second Lieutenant in the Marine Corps in July 1864; served on the Steam-sloop Monongahela 1864-1866 and saw action in the battle of Mobile Bay: August 5, 1864 – August 23, 1864; and rose through the ranks to Colonel in March 1899. He was promoted to Brigadier General upon retirement, and was a veteran companion of the Military Order of the Loyal Legion of the United States (MOLLUS). His nephew, who was named after him, also was a Marine Officer and would receive the Medal of Honor and also achieved the rank of Brigadier General.  The sword is in excellent condition with 100% bright black leather grip and wire, and a bright frosty blade. On the scabbard between the top mount and the throat is etched: LT. GEORGE C. REID / MARINE.  Shipping is free! $875.00

F312. BALLARD CARBINE: Wartime Ballard Carbines were manufactured from 1862-1866 by Ball & Williams of Worcester Mass. The “Old Model” were .54 Caliber and the “Model 1864” where .44 Caliber. The US government had a same contract for this gun, but the bulk were used mainly by the Militia of Kentucky and since this gun has no US government cartouche, it is most likely a Kentucky carried gun. Its serial number is 1854. This gun shows heavy field use, but is complete. The forearm has some chips and crack along the barrel with a retention pin hole on the right side. The stock has a 4-inch split through the wrist and comb area with an open hole for a screw on the right side. There is a large “X\” scratching into the stock’s right side. It has a reverse mounted Rocky Mountain front sight with a German silver blade and a military 2 leaf rear sight. The top flat is Ball & Williams marked and the left side has Merwin & Bray agent marked, and the right side has the Ballard patent stamp. The barrel has a good amount of original blue finish with some salt and peppering. The breech block properly functions and the manual extractor works. The barrel band is tight and all swivels are original. This is not a high-end specimen but a good representative example of one that saw some action. It would like great in any Civil War carbine collection, cavalry or Kentucky display. $1500.00 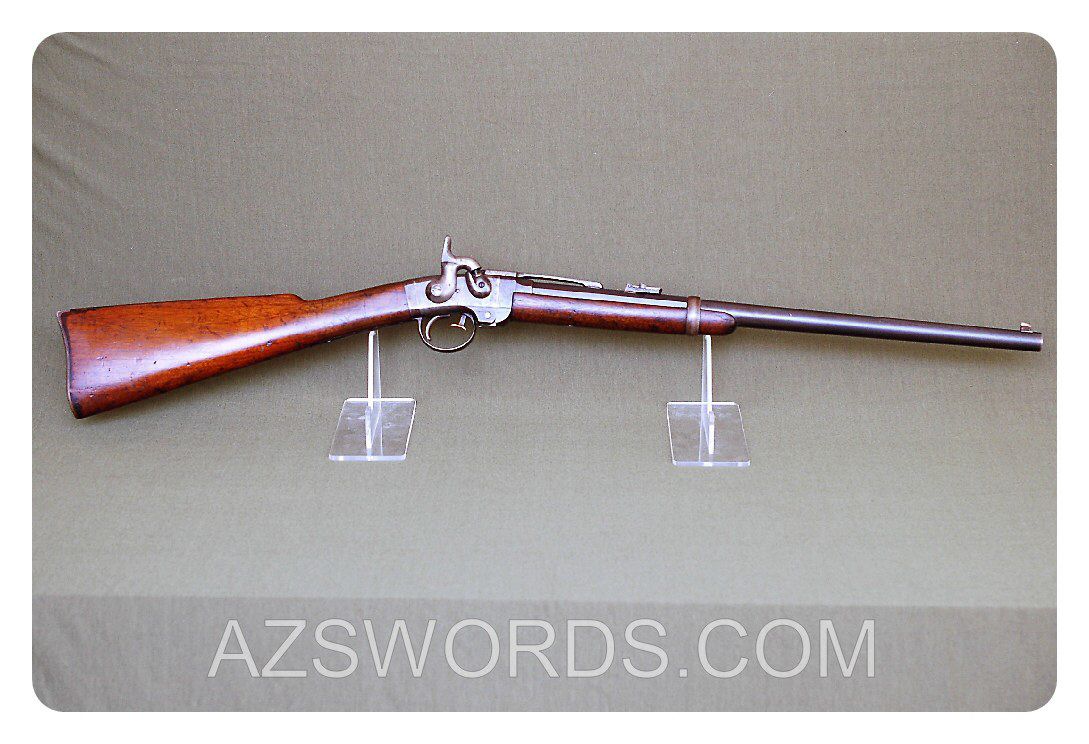 F313. SMITH CARBINE CAVALRY VERSION – 2nd WEST VIRGINIA CAVALRY: This is an example of the Smith Carbine - Cavalry version: serial number 4137. Serial number 4110 went to Company D, 2nd West Virginia Cavalry and serial number 4139 was issued to the Company H, 2nd West Virginia Cavalry Regiment; and though I cannot say for certain it went to this unit, there is a high probability it did! Smith carbines were made by several contractors, and this one was made & marked by American Machine Works, Springfield MA. The gun is in great condition with an even plum-brown patina over the original blue on the barrel with the remaining metal having a smooth gray iron patina with the smallest amount of case-coloring. The stock is sound with a discernable cartouche and some scattered dings and dents, but no major issued. The action is crisp and the bore has nice rifling and is bright. It has the original saddle ring and retention bar; rear site with all the blades, but the front site is missing the aiming blade. The barrel is marked (L.F.R). As previously mentioned, there is a good likelihood this gun was carried by a 2nd West Virginia Cavalry soldier. The 2nd West Virginia Cavalry had extensive combat experience and by the end of 1864, the regiment was part of General George Armstrong Custer's 3rd Division, Cavalry Corps and continued to fight in the Shenandoah Valley, and were responsible for eliminating Confederate General Jubal Early's Army of the Valley from the war. $2900.00 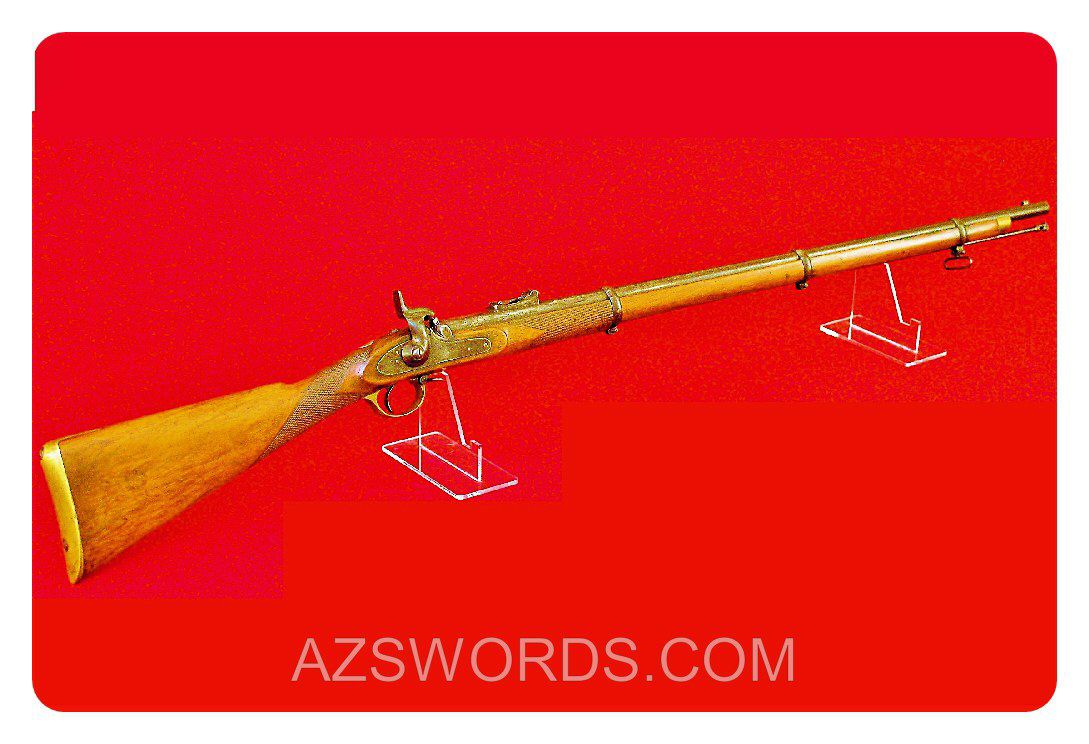 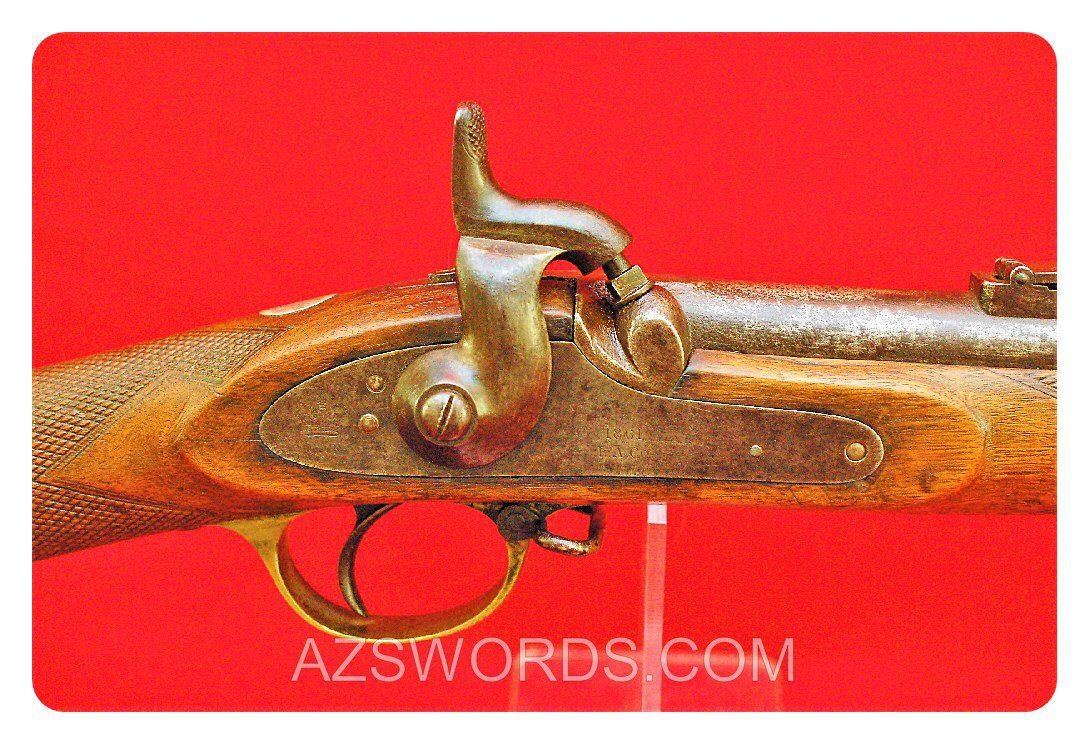 F314. LONDON ARMOURY BRITISH MILITARY CONTRACT P-1853 ENFIELD RIFLE: The London Armoury Company was established in 1856 with the sole intention to produce military pattern arms for the British War Department, as well as for the export market. The high quality, interchangeable part guns from L.A.C. were very desirable acquisitions for both the US and CS during the American Civil War, and both sides attempted to arrange to buy as many of these first-class muskets as possible. London Armoury P-1853 Enfield rifles of any type are very difficult to find, and those with any Civil War provenance or markings are particularly hard to located and extremely desirable. British military contract London Armoury P-1853s are relatively rare as well, due to the limited production of the gun when compared to the total numbers of Enfield rifles acquired by the British military during the 1860s. Early contract dated guns, made in 1861, are particularly hard to find in decent condition as the London Armoury guns were designated as a “First Class’ arms by the regular army and often saw hard use. This London Armoury P-1853 Enfield Rifle Musket is a scarce example of an early produced British military gun dated 1861. It is clearly marked in two lines on the lock 1861 / L.A. Co. with the usual (British Crown) / VR to the rear of the hammer, and the British Crown Arrow mark. The lock, which properly function, is plain, without engraved boarder lines and has a plain hammer without feathers. The breech of the gun is marked with a pair of L.A.C. marks, as well as the usual British military Proof, View & Definitive Proof and inspection marks of a Crown over the number of the inspector. The barrel has the original L.A.C. marked rear site; original barrel bands; front site; all which have a pleasing plum-brown patina. The ram-rod is original to the gun, as are the sling swivels. The bore has good rifling with no pitting. The stock shows the usual minor scattered bumps, dings, dents and handling marks you expect to find on a 150-year-old military long arm, but no breaks or repairs. It retains crisp checkering at the wrist and forearm and shows minor handling wear, and is stamped with the round London Armoury Company mark: LONDON ARMOURY / BERMONDSEY around the date 1861 in the center on the buttstock. There is also a silver wrist escutcheon with the engraved Old English script initials WSS; however, it unknown to whom these letters belong. This is a 100% complete and correct example of a scarce London Armoury Company produced Pattern 1853 Enfield rifle musket. It is a very desirable gun to add to any collection of British military long arms, or Enfield rifle collection. The gun is in wonderful condition and is extremely attractive. $2600.00

U926. NON-REGULATION STAFF & FIELD OFFICERS SWORD: This is a Non-Regulation Staff & Field Officers sword. It has a brass guard with a large center medallion with an American Eagle clutching a shield flanked by flags, and a banner with 13 stars above. On the opposite side of the guard is a four-leaf clover. The grip is shark skin with two strands of wire (missing center dragoon wire) and shows wear. The pommel cap has a small seperation split, but the hilt is tight. The blade is not mint, but the etching is visible with an Eagle and U S on each respective side. The sword is complete with the original scabbard which has a nice smooth brown patina. This is a sword that would have been carried by a field-grade officer or one in a command staff position. $1100.00

Credit Cards accepted for all purchases!

© 2004  Arizona Swords  azswords.com. All rights reserved in all media.